Image copyright Robert Pigott/CATERS Image caption One supporter was arrested About 150 Belgian police used pepper spray and batons to break up a demonstration over money for European Union railways in Brussels. More than… 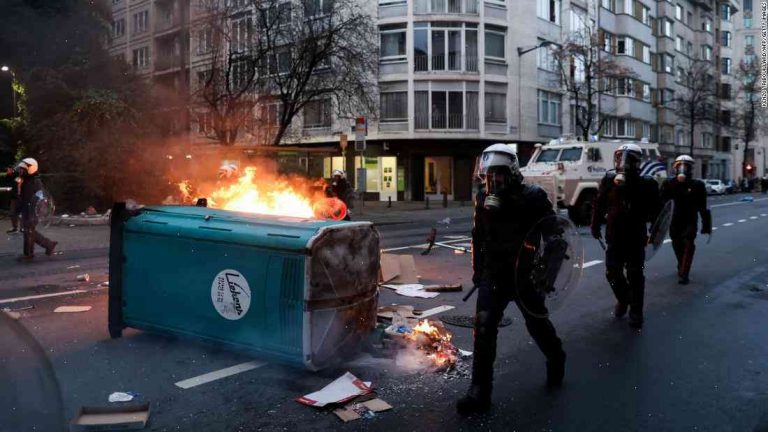 About 150 Belgian police used pepper spray and batons to break up a demonstration over money for European Union railways in Brussels.

More than 700 people were protesting against plans to subsidise the Irish state airline Cathay Pacific as a result of Brexit.

The demonstrators gathered at Parliament Square in Brussels, before marching to the headquarters of the European Commission and to the rail station.

Huge crowds turned out to witness the first mass demonstration against Brexit since the UK voted to leave the EU in June.

It is a sign of the growing disquiet of Brussels to the European Union, the BBC’s Peter Hunt in Brussels says.

Police said no serious injuries were reported during the two day protest and there were no major flashpoints, but clashes broke out when demonstrators tried to disrupt train movements.

One protester was arrested.

There were 10 people injured and five were arrested on Wednesday during violence in Paris.

The French leftwing party Parti de Gauche said it had asked investigators to look into whether two of its members were targeted because of their political views.

The group said on Facebook that clashes took place after a number of their members were “directly threatened” by pro-Brexit supporters chanting anti-EU slogans.

The government of Brussels is trying to reach a deal with Ireland and other EU states over an accommodation for London’s withdrawal by a special meeting of the council of leaders on 23 October.

A three-day EU summit will begin on Thursday and Brussels is hoping to reach an agreement with Britain.