A new helmet designed to prevent concussion injuries in football combines sensors and virtual reality While Dr Martens may be the only footwear the likes of Lionel Messi and Philippe Coutinho prefer, or even… 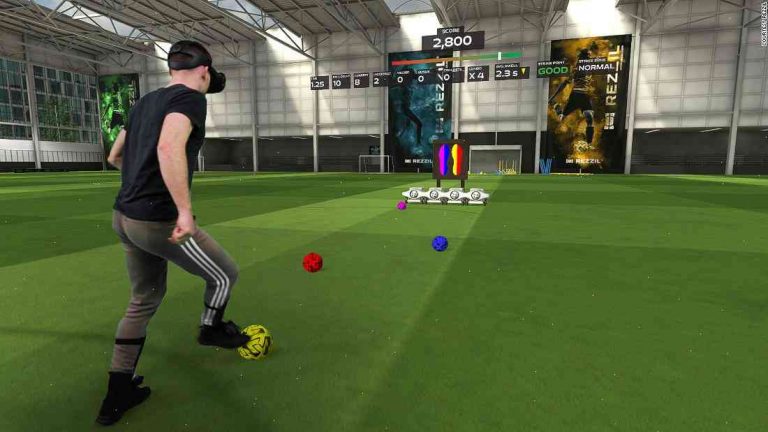 While Dr Martens may be the only footwear the likes of Lionel Messi and Philippe Coutinho prefer, or even the most fashionable footballers, there’s been something peculiar about humans for millennia – we’ve always been wearing helmets.

Now however, with a little help from technology, researchers are working on one which combines a tracking system for detecting impact with virtual reality goggles to create a virtual helmet that actively protects heads.

The device, called Head Impact Telemetry, is designed to detect a head hitting the surface of the pitch using electroencephalography, or EEG, and applying thermal imaging. Tissues are stimulated which record biomechanical data, and a computer model is created for testing potential concussion symptoms.

Paul Wilcox, professor of sport biomechanics at the University of Sheffield, who was involved in the work, said the tests – conducted for Sheffield Wednesday, as part of their stadium project in the city – showed that the system was 95% accurate and able to distinguish between those with real and simulated head impacts.

Virtual reality might even herald a new era in tackling, says Paul Wilcox, who developed the helmet with colleague Mark Stevenson. Photograph: University of Sheffield

“It would allow us to see how the skull actually reacts to the impact, if you had a real or simulated head impact,” he said. “We would be able to see if there are any tearful haemorrhages that might be early warning signs of a concussion.”

The device incorporates a tracking system, which uses a 3D sensor, as well as two inside, three outside and two external sensors that measure the pressure exerted on the skull and connect to a network of lights that displays the data generated by the sensors.

The new system has been implemented on 5,000 footballers in Sheffield and is being trialled by four other clubs: Burnley, Everton, West Bromwich Albion and Leicester City.

The Sheffield researchers worked closely with the World Professional Football Association to develop the system.

“Football is very much on the forefront of innovation in head injury research. Dealing with head injuries is not only a human rights issue, but a social issue. We are hoping to demonstrate using this research that we can get better through sport,” said Wilcox.

Wilcox – who previously worked with the technology firm ARROTECH – and his colleague Mark Stevenson were awarded almost £500,000 of health and safety funding from the Home Office and the Department for Transport.

Wilcox said the research they’d carried out was ongoing, although he admitted the helmet would only have been useful in future incidents when playing would be compulsory.

“We would be able to track head trauma in players and athletes in a physical game. It’s not ideal that we are currently playing sport in a simulated environment – we’re not physically in this environment, we are still wearing our normal cleats.

Several major sports have already been forced to overhaul their playing methods to make their games safer for players. In 2015, the Premiership introduced a rule that the pitches must be marked for all three competing teams, meaning a crossbar, goalposts, corner flags and other fixtures had to be erected.

A more radical change is imminent in football – the introduction of facial protection. Data suggests that an average of one per cent of Premiership players sustains a concussion on the pitch each year, with head injuries increasing in speed, severity and incidence over the past three years.

The R&D firm BEAT developed the technology for the use by the FA, which tests the new lens at several points along its long axis before it goes on sale.

Even with facial protection, however, Wilcox insisted that there was still potential for improvement – such as allowing players to easily see into the opponent’s arms and making it possible to see the pitch from closer range – and said the technology could be further improved.

“Wearable heads, like virtual reality, actually help us understand how the brain is working in a sport. They have the potential to reduce head injuries and help our understanding of how the brain works in a sport,” he said.

“If you apply technology to the physical sport of football you can actually, I hope, change the sporting game for the better. The only thing we need to do now is see how long people will be willing

British Prime Minister Theresa May hits out at the burqa