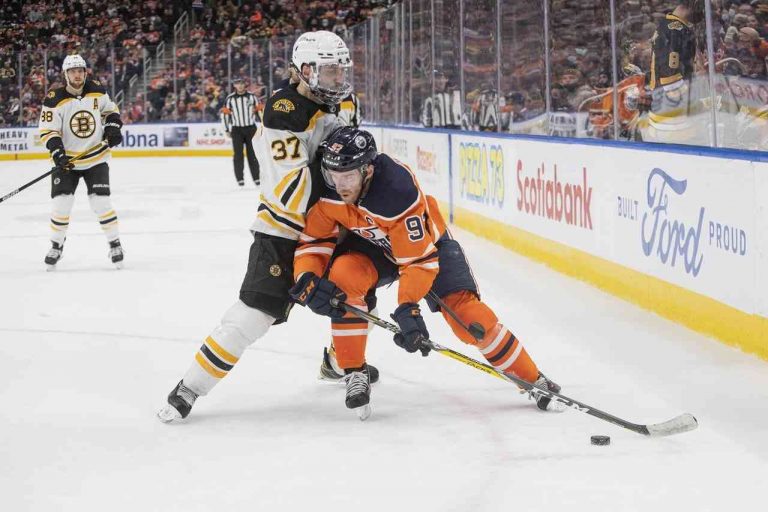 David Krejci and Riley Nash also scored for the Bruins, who snapped a two-game losing streak. Brad Marchand and Frank Vatrano each had two assists.

Connor McDavid, whose assist on Leon Draisaitl’s goal tied him with Hall of Famer Wayne Gretzky for most career playoff points (140), had a goal and an assist.

Kevin Gravel also scored for the Oilers, who dropped their fourth in a row overall. Cam Talbot made 26 saves.

Grzelcyk took a long stretch pass from Marchand and pushed a shot past Talbot on a power play.

The Bruins were outshot 21-10 over the first two periods, but they were the better team in the third and forced the Oilers to resort to power plays to maintain the lead.

McDavid scored his 44th playoff point on a pass from Connor McDavid with 8:37 remaining in the third, but Vatrano was there to block the goal attempt and then score to restore the two-goal lead with 7:28 left.

Oilers coach Todd McLellan got some warning from the league that his timeout at the 11:40 mark of the third did not constitute a penalty kill, leading to a strong shift from the Oilers, who outshot the Bruins 12-2 over the final five minutes of the period.

Gravel gave the Oilers a 1-0 lead on a power play midway through the first period when McDavid knocked the puck out of the air past the flailing Rask for his team-leading third goal of the season. McDavid also has seven assists in those six games.

Krejci tied it at 5:39 of the second with a shot from the point and his second of the season, and Nolan Patrick got Boston within a goal when he scored with 2:39 remaining in the period, but they couldn’t get that point.

NOTES: D Adam McQuaid was out of the lineup for Boston with a lower-body injury and D Joe Morrow replaced him. … McDavid has 11 points (two goals, nine assists) in nine games in Boston. … F Mark Letestu played in his 900th NHL game. … Grzelcyk’s goal came on his 20th birthday. … Marchand extended his team-leading point streak to nine games. … Hall is second in NHL playoff scoring with 54 points.

No to a coal mine, please: Ontario’s fringes have suffered enough | Russell Smith